My Christmas Eve tradition started when my husband and I got married. My husband had a son from a previous marriage that we would get every other year for Christmas. On the off years, we struggled to come up with a way to make Christmas special for him on Christmas Eve day. We especially wanted to make it great when we gave Jordan his first no-training-wheels bike. I came up with the idea to make a treasure hunt. Each clue would lead him to one of his smaller presents, while the last clue would lead him to the bike. He loved it, and a new tradition was born.

The first treasure hunt and the birth of a tradition.

Fast forward a few years later when my husband and I had our daughters, Bailey in 2001 and Brooke in 2003, and they became old enough to understand that their brother received special treatment on Christmas Eve. Like most younger siblings, they needed to be a part of the action. Therefore, I decided that Christmas Eve would be about a treasure hunt, scavenger hunt, or solving puzzles for gifts. Whatever I could come up with that would keep them busy on a night where kids are so hyped for the man in red. But, I also decided that save for one gift, the presents that they received would be those that nobody really wants to get for Christmas, but the ones that they need.

When I was a kid, we got to open one gift on Christmas Eve, and it was always pajamas. My brother and I would open our pajamas, put them on, and then count down the excruciatingly slow minutes until bedtime. Then we would go to bed in our brand new pajamas and lay awake forever knowing that Santa was coming any minute. My brother was particularly bad about going into Mom and Dad’s room and asking if Santa had been there, and if it was time to get up yet. When I had my own young children, I began thinking about how I could make Christmas Eve not only more exciting, but more time consuming, so that I didn’t have to deal with Christmas Eve bedtime struggles. And, just maybe I could keep them content enough that I could sleep in on Christmas morning. The Christmas Eve activities became all important for this goal. 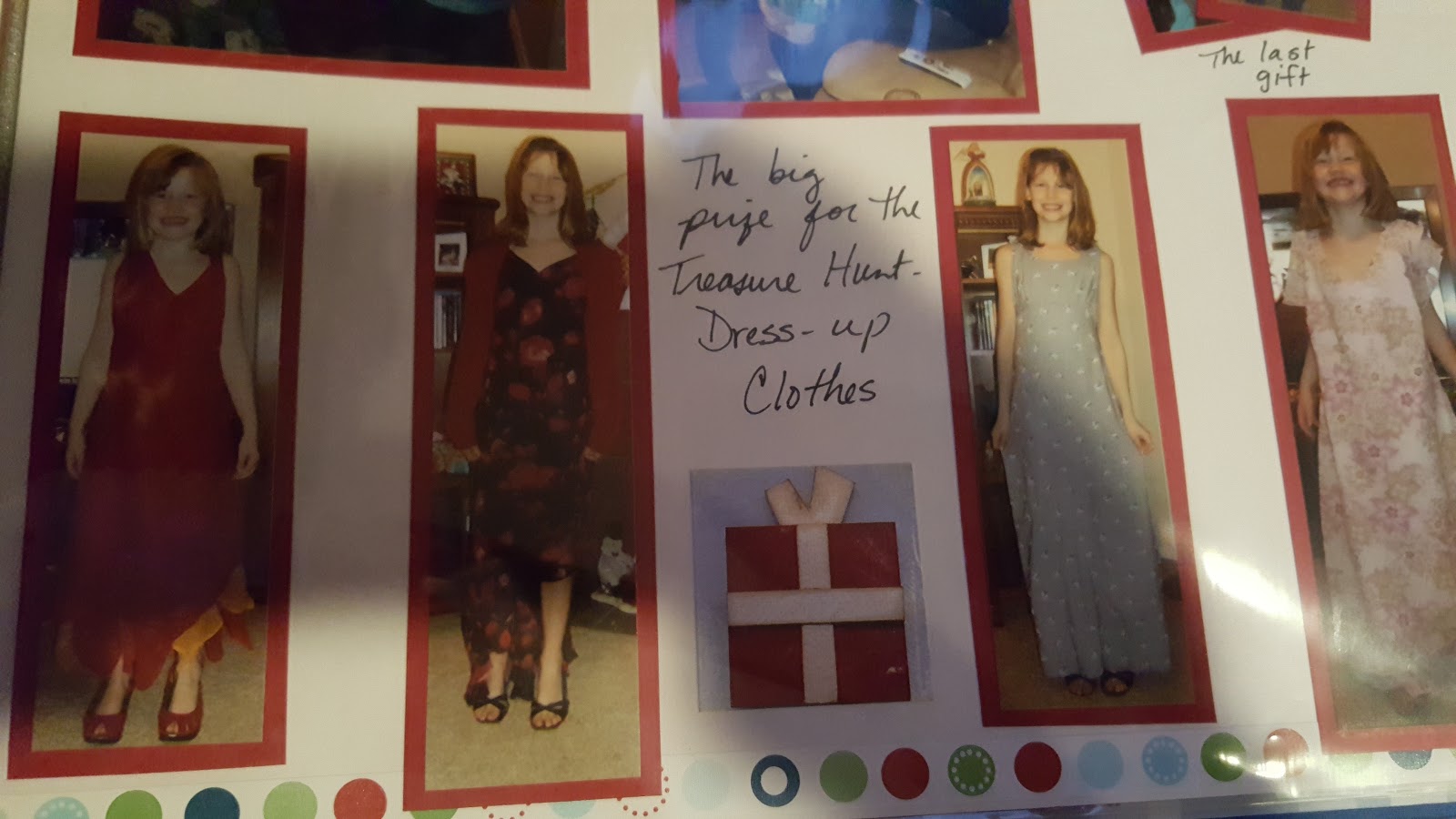 I raided some closets and spent $10 at a thrift store for dress-up clothes that entertained the girls for hours on Christmas Eve.

Since then, each year I’ve done something different. I’ve done treasure hunts with written clues. Before my girls could read, I did treasure hunts with picture clues. The presents are things like pajamas, clothes, school supplies. Save for that one final gift that is designed to occupy them on Christmas Eve. As a parent, this system allows me to get my kids what they need and still enjoy my Christmas Eve. I get to eat Christmas cookies and enjoy a few adult beverages while my kids create with a new art set, watch a movie, or play with a cheap toy. It works out well for everybody.

Now that they my girls are teens and my step-son an adult, it has become even more fun for me. It’s all  about scavenger hunts that make them do embarrassing things like dancing and singing, or a puzzle (like a string maze that takes them forever to unwind) that is completely impossible. 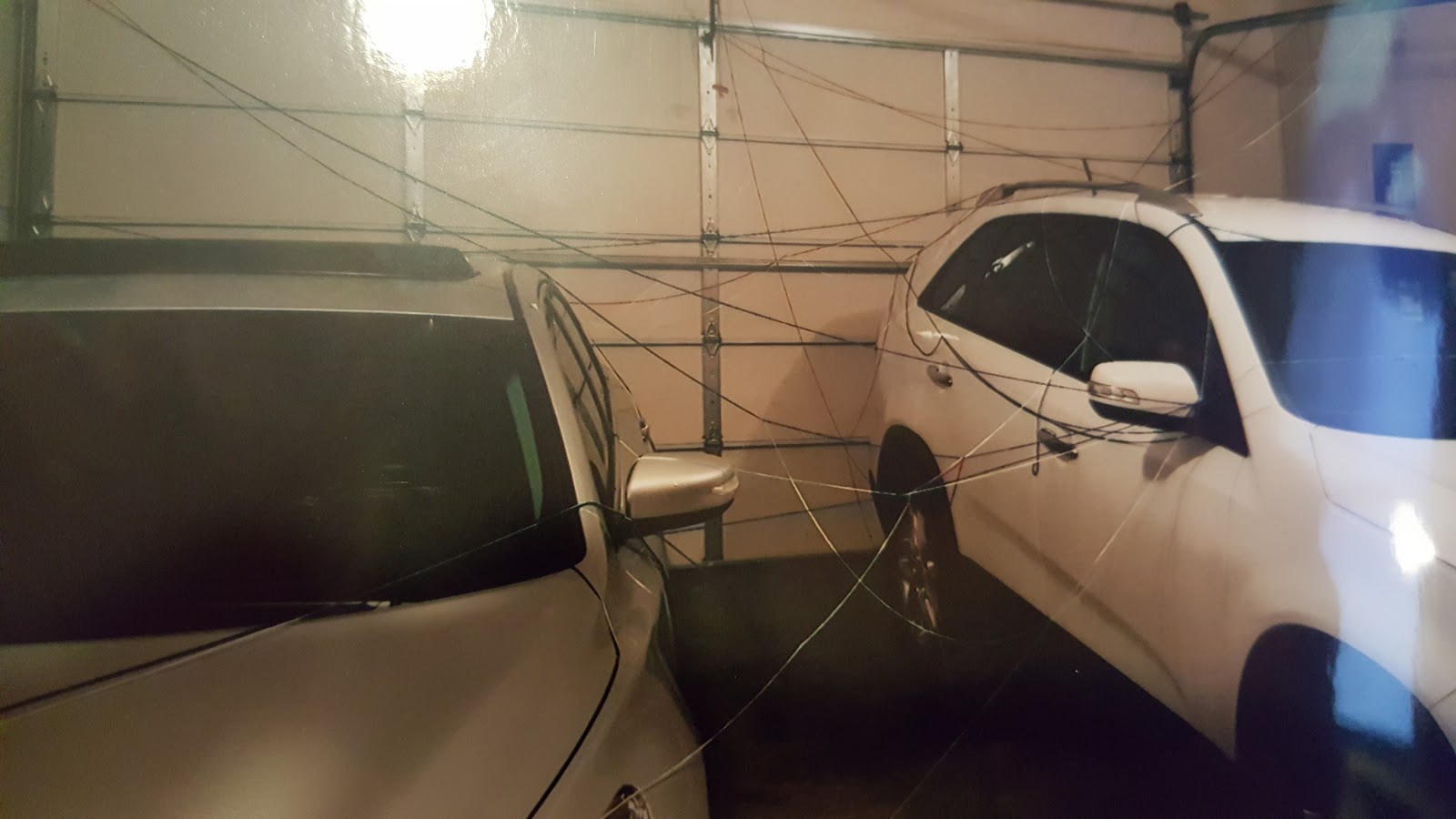 Each kid had a yarn color they had to find. Presents were tied at intermittent points as they wove their way around and through carsand each other. It was a masterpiece!

I look forward to coming up with more ideas for Christmas Eve in the years to come. I will continue doing these for my kids, their significant others, and even for grandkids someday. This year, I’m doing my take on Babushka dolls. Merry Christmas!